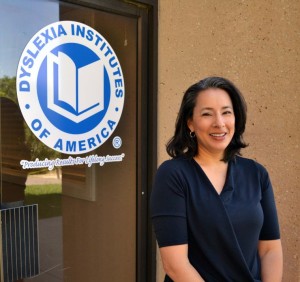 It took training to open Dyslexia Institutes of America in Tulsa, coupled with realizing her own daughter’s struggles with dyslexia, for Penny Stack to realize she too had the learning disorder.

It sure explained why it took me 10 years to get those degrees on the wall and why I flunked seven or eight classes in college, said the occupational therapist, pointing to her associate, bachelors and masters degrees. It wasn't because I was stupid or wasn't able to, it was because I wasn't learning in a manner that worked for me.

Stack runs Oklahoma’s only Dyslexia Institutes of America, which opened an office in May at 7040 S. Yale Ave. in Tulsa.

The franchised therapy system was developed by Dr. Elaine B. Jett and is based in Mattoon, Ill., Dr. Jett first developed her program after observing students in the Sylvan Learning Centers she ran.

She noticed some smart students were still not progressing properly under Sylvan’s reading system and discovered they displayed characteristics of dyslexia, so Dr. Jett did some clinical testing and later opened her first dyslexia-focused clinic in 1999 in Springfield, Ill.

About 15 to 20 percent of the population have some symptoms of dyslexia, according to the International Dyslexia Association. It is a language-based learning disability affecting those of at least average intelligence.

It also has myriad symptoms – including reading difficulties, poor spelling, poor writing and difficulties understanding what one hears.

Stack said patients have told her its as if words are moving or falling off a books pages as they read. Others can't discern words or letters.

Consider all the different fonts, especially with today's technology, she said. Someone may look at a bold letter… and see it in a goofy font and they might have no idea what that letter is because it just doesn't stick.

It's like they're putting the puzzle pieces together and can't turn it around and put it together.

Stack said she has difficulty comprehending what she read and often has to re-read instructions several times to understand the material. She said her 11-year-old daughter has similar troubles.

After discovering her daughter's difficulty about three years ago, Stack set out to find a program that would give long-term solutions and not just a quick fix. She said Dyslexia Institutes, which she first began developing in Oklahoma in 2011, does thorough testing to determine both what issues someone has and how to best cope and improve a child or adult's weaknesses.

Dyslexia is not curable and has the propensity to be genetic, according to the Mayo Clinic.

Treatment in the program is long term and often involves several sessions that focus on auditory memory skills, reading improvement and phonics. Stack said the program can be costly, but some insurance providers will help cover or reimburse for services.

This is not a quick fix. Dyslexia is not curable. It can't be fixed in a week, it can't be fixed in three weeks, it's not a diet issue, said Stack, who said repetition and practice are key. It takes a long time to develop that neural pathway and the synapses for the brain to kind of re-map for that information to go back and forth.

And for some like Shaynee Sherwood, a junior at Oral Roberts University, the testing at Dyslexia Institutes not only helps prove to her school that she is qualified for assistance under the Americans with Disabilities Act, it's also helped her get beyond her high school education.

If I hadn't discovered the program, I don't think I would've been in college at all, said Sherwood, 21, who was tested in 2000 at one of the first Illinois offices. If a professor says I have to set aside two to three hours for homework, I know that I really have six. But because I know, I can deal with it.

She said she can't take notes in class, but rather records lectures on her iPad and reviews the audio later to study.

Sherwood came to Stack in March to get tested so she could receive Disabilities Act exceptions in classes. She now works with Stack's daughter and said having experience the same frustrations helps her teach.

It's kind of surreal to think of how it used to be and see that struggle for me, Sherwood said. I used to cry when I couldn't get something done. We just really feel for people when you see somebody struggle.

And although her struggles still pop up, Sherwood said she wouldn’t change who she is.

There are days I'm very frustrated, but If I had the choice, I would not choose to not be dyslexic, she said.

About the Author : Penny Stack